10 Useful Flutter Applications You Must Know 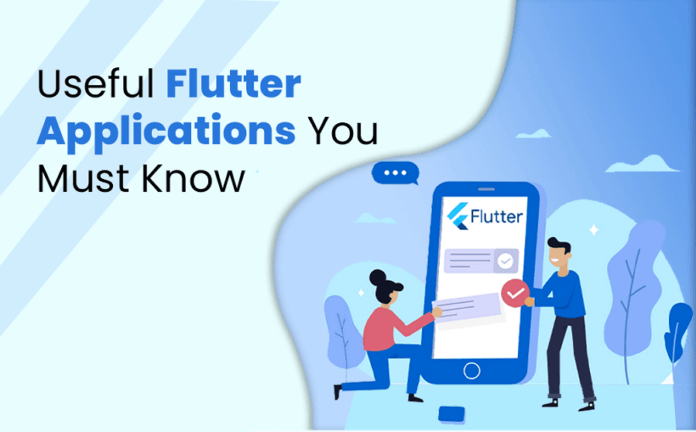 Flutter is a developer-friendly language developed by Google for cross-platform compilation of applications. Flutter made its debut to the public with version 0.6. The first version of Flutter, dubbed “Sky,” was exhibited at the Dart developer summit 2015.

Google stated that this language could render consistently at 120 frames per second. However, the latest version is steady and sturdy with continuous improvisation and updates. New features are also emerging as time passes.

Flutter is gaining popularity among developers due to its ability of cross-platform compatibility. The upcoming Google operating system, Fuchsia, is also built on the flutter framework.

What is Flutter & How does it Work?

Android Studio and VS Code are two popular Integrated Development Environments(IDE) for Flutter framework. These IDEs support a plethora of extensions and plug-ins.

There are numerous reasons to convince you for E-commerce Flutter development. The features of Flutter are available individually in other frameworks. But, Flutter is a complete package as it includes all the features.

It is currently the best programming language for developing Flutter applications. We will explain the reasons to use Flutter in detail below:

Flutter is an advanced framework and is uncomplicated to create mobile applications. Codes of Flutter are compact, and you can create a native application without any cluster. You can differentiate between Flutter, Java, Swift, and React Native.

You can change the code in Flutter and see the effects in real-time. This feature of Flutter is called the Hot-Reload feature. In no time, you can see the changes after saving the code. Significant changes need you to reload the application to see the changes. But, small changes like modifying the size of an element appear in real-time.

Flutter is an ideal choice for startups who want to show their E-commerce Flutter mobile app to investors in a short time.

Consider these points to know why you should prefer Flutter app development services for your MVP:

Everything in Flutter is described in a detailed manner with easy examples. Even the most basic things are explained properly.

Flutter has a thriving community, yet it’s merely the beginning. Many people are engaging on social media platforms to talk about Flutter app development services. People are sharing many things about Flutter, which means that there is much to learn.

You can learn many tips & tricks from tutorials that people share in the Flutter community.

VS Code and Android Studio Support

Flutter is accessible on different IDEs, including the two most prominent editors, VS Code and Android Studio. You need to download Flutter and Dart plug-ins.

In comparison, VS Code is a lightweight platform easily configurable with plug-ins’ help. Android Studio is a complete platform with everything integrated.

Flutter is relatively new in the market, and every new technology has some weaknesses in starting. There are some disadvantages in Flutter app development services also, like every other technology, that are explained below:

Third-party plug-ins relieve the developer by eliminating the need to code everything from scratch. For older technologies, finding the required plug-ins is not an issue. Flutter is still a new technology, and finding plug-ins is difficult.

However, Flutter has 25,000+ packages on Flutter’s official resource page, and the size of packages keeps increasing. Right now, it’s less than its competitors React Native, but 25000+ packages being available for relatively new technology is a good feat.

Also, the Flutter widgets cover most of the development cycle without third-party plug-ins.

Dart is an excellent programming language; it’s fast and object-oriented. In terms of popularity, it falls behind the most popular technologies like JavaScript, C#, or native Objective-C and Java.

Beginner developers don’t pick up the Dart programming language. Hence, finding developers for your development team can prove challenging. You should keep this in mind before choosing a cross-platform approach.

Smartphone users have limited storage on their mobiles. The users won’t prioritize your application over their precious photos or playlist. To keep the application size minimum, developers try eliminating animations and compressing images.

The minimum app size of a Flutter application is 4 MB which is bulkier than its competitors Java(539 KB) and Kotlin(550 KB) applications. So, it’s preferable to develop the application with minimum size.

These are some drawbacks of Flutter development, like with any other technology. With continuous evolution, Flutter had steady growth with many initial issues resolved.

The questions raised about Flutter’s implementation for iOS are no longer relevant due to Cupertino widgets.

With continuous evolution, Flutter had steady growth with many initial issues resolved. The industry leaders Alibaba and Google also proved the effectiveness of Flutter development by using it.

A lot of applications are developing with Flutter. And there are high chances you are currently using or have already used apps built with Flutter. It’s important to know that Flutter is a developer-friendly language.

It’s suitable for E-commerce Flutter mobile apps or any other Flutter applications. Developers & businesses prefer Flutter due to its rich features and cross-platform compatibility.

Businesses hire developers or a Flutter app development company to develop flutter applications. Following the development, they can release the apps built with Flutter for both iOS and Android.

Developers who haven’t used Flutter are blown away by what Flutter app development company have done with it. Flutter can optimize and streamline the mobile app development process for everybody.

To demonstrate what Flutter is capable of, we’ll walk you through some of the most well-known Flutter applications developed:

Google ads is a Flutter application that allows managing your google ad campaigns. It’s a lite version of the desktop to track the campaign results from anywhere. Google will develop using its framework for app development.

Google Ads is a premier Flutter application to manage your campaigns and get all the data in one place. The application feels premium due to its subtle and modern look.

KlasterMe is a social media website designed by Flutter developers. This social media application is popular where people build pages and share their creations over the internet.

The interface of this app uses content from other KlasterMeers, providing an attractive design. This app also simplifies the posting process.

PostMuse provides users with a broad category of typography, frames, and templates. Due to PostMuse, many people are unleashing their creativity on Instagram. Flutter allowed the rapid development of PostMuse with limited resources.

It allowed them to reach the app market in no time after development. Flutter improved the app’s usability and design without hampering speed.

Take your seat is a social app developed for sports enthusiasts who want to enjoy sports events. This flutter application notifies the users about the live sports streaming events in a pub, tavern, or restaurant.

“Take your seat” helps the sports fans plan the trip to the stadium and track their favorite team with this one app only.

Watermaniac is a low-size application for monitoring the water intake of humans. It is developed with the Flutter framework. It benefits the users by allowing them to observe their water intake.

Users can set a target, analyze their water intake history, and get alerts for water consumption. This Flutter application allows people to use their smartphones as a water intake tracker.

Also, because of Flutter, developers can easily maintain and update the application as per requirement.

After the lockdown, there was a high jump in global cryptocurrencies such as Bitcoin, Ripple, Ethereum, and Dogecoin. However, people observed a lot of fluctuations in cryptocurrency.

Cryptograph collects regular data and statistics on over 1,600 cryptocurrencies. The app displays currency conversion rates. It also allows you to select and add coins to your favorites for quick monitoring and many other features.

Park N Pay adopts the latest Flutter language to allow users to find, reserve, and pay for a parking place. This flutter application is available on both Android & iOS.

Sonos is a Flutter application that can play music from different music apps in one centralized application. When this app was released, it was buggy because it required cross-platform compatibility for smooth performance.

The developers switched to Flutter and hired Flutter app development agency to make the application compatible on multiple platforms within a short time. The latest version of Sonos works ideally and is available everywhere.

Toughest is a learning application that is used for your interview preparation. This application trains you on various questions, including the commonly asked and the new ones.

Using “Toughest,” you can plan and control the flow of your interview with remarkable answers to the questions asked. This app contains lots of questions curated to match the current trend.

In this app, you have the feature to share your favorite questions with your friends and help them improve their interview skills.

Google Pay is another Flutter application of Google. Google Pay is a payment app that is fast, secure, and reliable. Payment apps must be as safe, responsive, and bug-free as possible.

A malfunctioning payment app can prove to be a costly affair. And Google Pay being developed in the Flutter framework can be a strong seal of approval.

Flutter is improving with time and is moving in the right direction with tremendous growth. You can see that even the most prominent players in the market are employing Flutter app development agency for creating Flutter applications.

Developers or businesses who want to release the application in a short time should try Flutter. Flutter is suitable for those who don’t want the hassle of coding the same application for multiple platforms.

Flutter development is preferable in the following situations when:

Flutter applications are already gaining much-deserved popularity in the community. Flutter allows developers to develop a well-functioning application with compact and efficient coding.

As a result, many new Flutter app development agencies are interested in this technology, making it easier for businesses to discover the top talents.

Isn’t it often that you find a product on Instagram and wish to buy it? Your answer proves how powerful Instagram content is and...
Read more
Top 10

With the increasing demand for mobile applications, many businesses and organizations are coming up with plans to launch mobile apps for themselves. But the...
Read more
Top 10

App development is the need of different businesses to be a part of the digitization league. It is all about keeping the customers engaged...
Read more