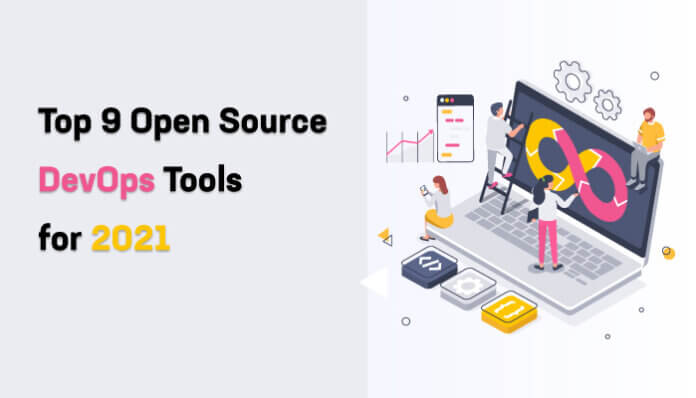 Implementing DevOps isn’t just about making cultural shifts to bring software developers and IT operators together. Organizations require modern tools to bring DevOps into action. However, spending loads of money on state-of-the-art SaaS solutions will definitely increase your cloud budget.

Therefore I’ve put together a list of top open-source DevOps tools that can handle everything from configuration management, container builds, and orchestration to microservice networking, full-stack monitoring, and CI/CD automation. 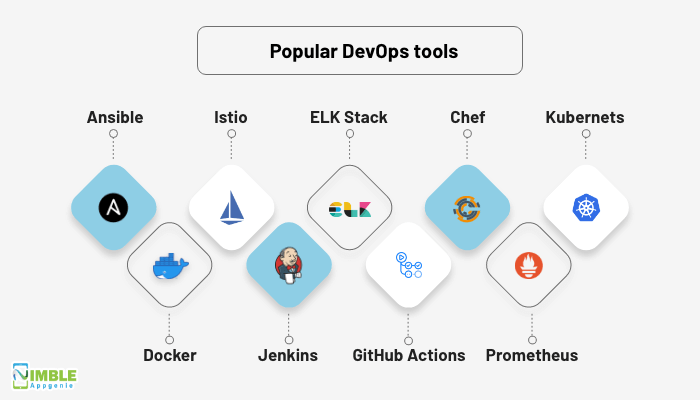 So without further ado, let’s get familiar with these DevOps tools:

Hosted by the Cloud-Native Computing Foundation (CNCF), Kubernetes is the best open-source DevOps tool for 2021. The tool saw an increase of 48% in adoption during the last year. It is a microservices and container-based software that is majorly used to orchestrate containers. To eradicate the release of microservices manually, Kubernetes automates the deployment, maintenance, and scaling of the containers in the production environment.

Although microservices are a handy form of development, the concerns like ensuring the consistency of security, observability, encryption, and telemetry elements across all devices still remain a challenge for DevOps teams.

An answer to this problem is a service mesh, which allocates a sidecar proxy to every container to abstract the networking capabilities to the control plane. Istio is among the most popular open-source mesh services. It is built upon Envoy which allows it for plugins and extensibility.

GitHub is indeed the most commonly adopted source control and software collaboration tool in the world. Its recent update introduced a new feature called GitHub Actions, which enables software packages hosted on the platform to accept inputs and trigger several processes.

GitHub Actions can automate some amazing DevOps workflows like branch management, code reviews, and continuous integration and continuous delivery (CI/CD) processes. Although GitHub Actions is just a feature, it was important to list it in this list of top open-source DevOps tools.

The most crucial element of the DevOps philosophy is to enable the automation and deployment of new iterations efficiently and streamlining the CI/CD is the part of this.

Jenkin is an open-source automation tool that supports hundreds of plugins that are adequate to automate the process of development, deployment, and testing of IT projects.

Although GitHub action is said to outperform the CI server in the future, CI tools like Jenkins, GitLab Community Edition, and TravisCI are still among the preferred choices for many DevOps teams.

Prometheus is an open-source monitoring tool for DevOps teams to visualize applications and act upon the identified issues. It is a CNCF project that is built to collect time-series metrics by scraping HTTP endpoints and automatically generate a system to interact with the endpoint data.

Ansible is an open-source automation tool that is sponsored by Red Hat. It is used by the DevOps teams to automate networking, cloud provisioning, configuration management, deployment, and other such activities.

The ease of use is the USP of Ansible – all the users would need is a text editor and command line to interact with the tool. The software engineers can describe the software infrastructure in the text document and organize their desired states in the playbook.

Chef is an infrastructure-as-code (IaC) solution that is powered by Ruby and works perfectly with the majority of cloud service providers (CSPs). It majorly focuses on automating server-side configuration management. Chef is actually very handy while provisioning a large number of machines.

This stack is a union of three open-source projects – Logstash, Elasticsearch, and Kibana that are maintained by Elastic. Making use of ELK Stack, DevOps teams can extract and feed data from any source to create helpful visualizations.

Elasticsearch enables the centralized logging of data whereas Logstash is used to collect and process the data. Kibana on the other hand is used to visualize the data.

In 2021, programming isn’t just about deploying quality code, it is about deploying with efficiency. This requires development and operations teams to collaborate to launch the software products faster. The DevOps toolkit that we’ve discussed is aimed to facilitate the required collaboration among the Dev and Ops teams.

When it comes to picking the right DevOps tool among the stack of many, it is recommended to adopt vendor-neutral tools that have strong community support which represent diverse stakeholders.

Although open-source tools are free to use, the DevOps teams must ensure that the tool they pick can outperform others in terms of time-to-onboard as well as has low operational overheads in terms of self-hosting.

Divya Srivastava
Divya is an outstanding writer at Nimble AppGenie. She is very innovative with her creative ideas. She is very passionate about technology implementation in several industry verticals and always keen to learn new opportunities that bring business efficiency and profitability. Whereas, Nimble AppGenie is an expert in developing solutions for Healthcare, FinTech, and EdTech. Nimble AppGenie is helping small-large scale enterprises by providing innovative solutions that excel in the market.

What are the Advantages of using Azure Virtual Desktop?

Organizations must offer work-from-home for their teams in today's world, but for many, just purchasing additional technology other than a desktop PC is not...
Read more
Technology

Top Chatbot Trends to Look Upon in 2022

The upsurge in on-demand messaging has evolved people’s preferences for communication. With the growing trend of live chatbots, more and more industries are integrating...
Read more
Technology

What do you understand about APNs?

The AWS Solutions Provider (APN) is a collection of cloud software or telecommunications companies who have achieved Amazon Web Services' approval by completing a...
Read more