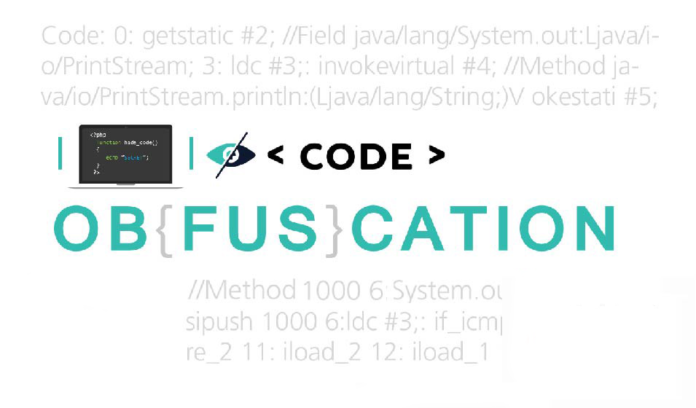 Every day, the quantity and variety of approaches and dangerous programs used by hackers to obtain unauthorized access to apps, devices, and personal data grows. Often, the entry point for an attack is the software code itself.

By 2020, scanning for and exploiting code vulnerabilities will account for 35% of all breaches, making it the most common first infection channel, even ahead of phishing. Fortunately, security professionals tasked with safeguarding the internet have their own array of tools with which to strike back.

Source code obfuscation is one of the most powerful tools accessible to developers and security teams in the fight against application piracy, device infiltration, code injection, and other malicious behaviors. But what exactly is source code obfuscation, and what does it imply in the context of software development? We’ll take a closer look at it now.

What is source code obfuscation, and how does it work?

Decompilers and attackers seeking to reverse engineer a program can be mitigated by having a defined approach on how to obfuscate code using overlapping techniques.

Reverse engineering is a high concern to application security, according to OWASP, because it serves as a launchpad for most forms of assaults.

Here are some of the most prevalent obfuscation security techniques used by developers throughout the world to give you a better picture of how obfuscation in programming works.

There are seven common approaches for obfuscating source code.

The transformation of data

Transforming the data handled by the program into another form is a key part of source code obfuscation. This has a minor impact on the code’s performance but makes it more difficult for hackers to break it down or reverse engineer.

Using the binary form of numbers to make source code more complex, changing the form in which data is stored, or substituting a value with an expression are all examples of ways to obfuscate code in this way.

The orientation of the code is altered by modifying the control flow of the code. This implies that, while the end effects are the same, understanding why the code goes in a specific manner or where it is heading takes a lot longer.

Change the order of program execution statements, change the control graph by introducing arbitrary jump instructions, and convert tree-like conditional constructions into flat switch statements can all be used to obfuscate control flow in programming, as demonstrated in the diagram below.

Some source code obfuscation security solutions employ this technique to change the addresses of program data and code in order to create unpredictability and make it more difficult to hack. The obfuscation technique randomizes the absolute positions of some code and data in memory, as well as the relative distances between distinct data items when an application is constructed.

This not only lowers the chances of successful assaults but also implies that even if a hacker succeeds on one application or device, they won’t be able to recreate it on others, limiting the value of reverse engineering a program.

By routinely distributing updates of obfuscated software, this strategy proactively blocks attacks, discouraging hacker attempts to breach the system. An attacker is compelled to forsake their existing analysis by periodically replacing existing software with newer disguised instances. Finally, the effort required to break through the obfuscation security outweighs the benefit gained.

Obfuscation of metadata and message call in Objective-C

Obfuscation technologies for Objective-C code, such as Intertrust’s application shielding solution, work in two ways. To begin, they obscure plain text message calls in the source code so that they are difficult to read and alter.

Second, they encrypt some Objective-C metadata to protect sensitive information from static analysis tools, such as the names of categories, classes, methods, protocols, class properties, and instance variables, and method arguments and types. When the obfuscated application is loaded, the encrypted data is only decrypted at runtime.

Instructions in assembly code are obfuscated

Reverse-engineering becomes more difficult when assembly code is transformed and altered. Using overlapping assembly instructions (also known as the “jump-in-the-middle” method) to hide code within other code, leading a disassembler to produce false output, is one such way.

By include unneeded control statements and garbage code in assembly code, it can be made more resistant to penetration.

By decompiling and recompiling a program’s code, debug information can be utilized to reverse engineer it and find its source code. As a result, it’s critical to prevent unwanted access and debugging. Debug data is changed or removed entirely by source code obfuscation techniques, which change line numbers and file names in debug data.

Obfuscation of source code in programming aids in the prevention of hacking.

Software, application, and even home IoT device attacks are all too common.

As more of our personal lives and sensitive data and information go online, attacks are becoming more common. Knowing how to disguise code is an important part of our protection against hackers and other malicious actors.

Loida Mckinnon
Loida Mckinnon is a Full-Stack developer with eight years of experience working with Fortune 500 IT teams.

What To Do When Technology Quits On You?

Technology is an excellent resource when it comes to business. It's a powerful tool that will help entrepreneurs be more productive and effective. That's...
Read more
Business

Boosting the Recruitment Process with an Applicant Tracking System

If you're a hiring manager looking for a new worker, you're likely overwhelmed by the amount of information available. This can be particularly true...
Read more
Technology

Best 5 Image to Text Extractors for Freelance Experts in 2023

Looking for a good image to text extractor? Let’s help you find it. An image to text converter is a very convenient tool. Freelance experts...
Read more